“Nnaji crafts a compelling narrative of the struggles these activists faced in their fight for liberation, and the intersectional black feminist movement that they ultimately organized.”-Bitch Magazine

“Hands down the greatest film I’ve seen recently…The ways in which it touches upon the experiences of black women in relation to the masculinist Black Power movement as well as the emerging white middle-class feminist movement, are brilliant and incisive.”-Elaine Castillo Full Review Here

“As many young Black women begin to explore feminist works by noted women of color, it’s definitely a valuable and important narrative that’s been added to the discourse.”-Tiff J. Full Review Here

“That was one of the best movies I have ever seen, I am so moved by your work. We all were. Keep on going and doing what you do so well!!! So inspiring and brilliant!” -Rushika Patel, University of Michigan, Flint.

Reflections Unheard was awarded “Best Film on Matters Related to the Black/Marginalized Experience” by the Black International Cinema Berlin Film Festival in 2014. 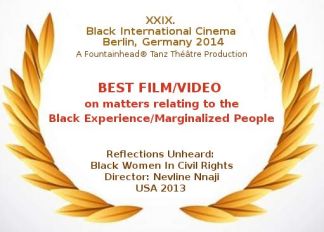